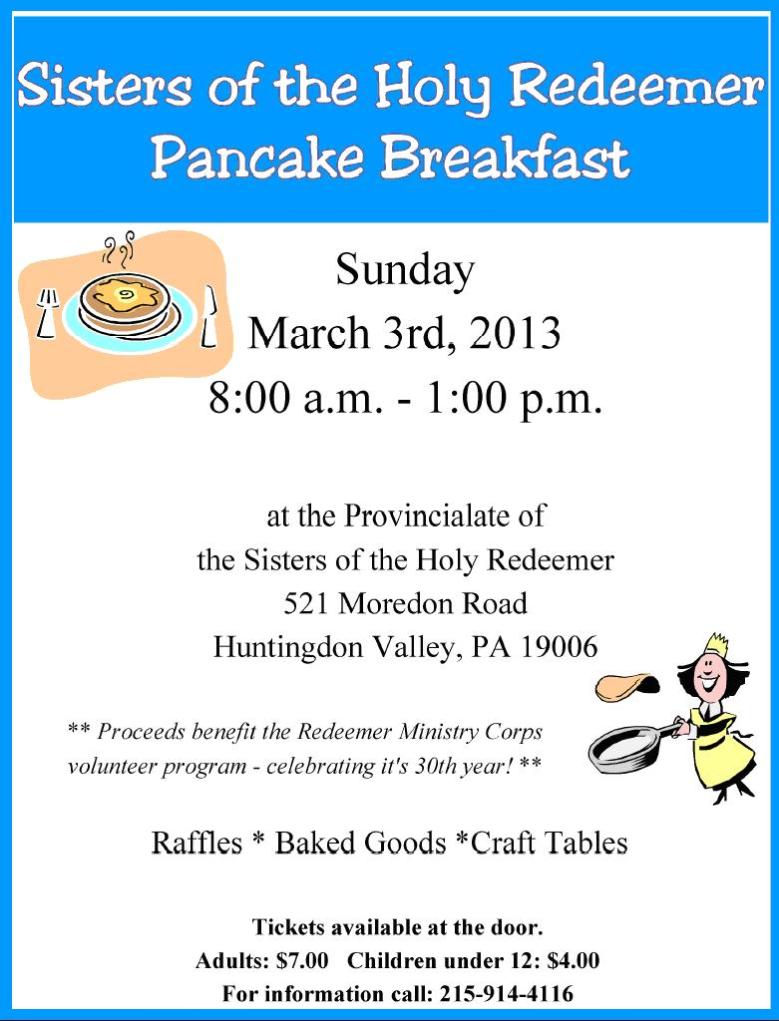 On Sunday, March 3rd from 8:00 am to 1:00 pm at the Provincialate of the Sisters of the Holy Redeemer (521 Moredon Road, Huntingdon Valley, PA), volunteers and staff will be serving up a delicious breakfast consisting of pancakes (plain and blueberry), scrambled eggs, sausage, bacon, coffee, tea and juice.

We will also have craft tables, raffle baskets, baked goods and more!

Tickets are $7 for adults and $4 for kids under 12 and will be sold at the door.  RMC Alums eat free!

Proceeds benefit the Redeemer Ministry Corps program, celebrating 30 years of service!  We will have Sunday Liturgy at the Provincialate at 11:00, and RMC will be the special intention for the Mass.

“Working as a nurse aide in the Cancer Center at Holy Redeemer Hospital I strongly believe that not only providing direct services to patients, but also that a caring and comforting presence is extremely important to the healing process. As a nurse aide, I assist the radiation oncology nurses with blood transfusions, which includes preparing the patients to receive the blood, taking vital signs, and caring for the patients. A blood transfusion takes between four and a half to five and a half hours. Every day, I look forward to talking with the patients in order to build a relationship and be a welcoming presence where they can feel comforted and cared for as they receive their treatments. It is amazing to watch how the patients’ attitude can completely change from the start of their treatment to the end in just one day. By simply spending time with the patients through listening and talking with them for the several hours they are receiving treatment can really make a difference both physically and psychologically. I would like to share a story with you about a patient whom by asking a simple question of “what book are you reading?,” opened up and told me his life story.

Have you ever felt like you were forced to do something, captured like you were a prisoner and could not escape? It sounds like a tough situation, struggling to overcome this imprisonment while feeling an invisible veil of fear of the unknown. This is the story of a 97-year-old man who, with courage and determination, pushed through his deepest fear to physical and mental freedom. He escaped from the Nazi concentration camps. He was deceived and captured, along with four other guys. While in the camps, he explained his plan of escape to the four guys; however, two did not want to partake. They feared being killed for trying to escape. My patient told them, “We will die if we stay here and we will die if they find us trying to escape. Either way, it is worth taking a chance.” My patient, along with the fourth guy, set on their journey to escape. They traveled underground and upon entering the woods they had to go their separate ways so they would not be spotted. My patient traveled for an extended period of time, he ate whatever he could find, weighed no more than 100 pounds, and although his body might have been weak and malnourished, he was an incredibly strong man. He made it to the Russian border and although the Russians started beating him, he looked up at them and smiled because he knew that they would not kill him and that he would have a chance to live.

My patient lived and continued to escape the hardships of the Holocaust. He had a transport business, as well as, many houses where he would take people in. He clothed, fed, and gave them shelter, a place where they can feel safe. He even met a beautiful woman whom he liberated and had the privilege of calling his wife. Upon getting married, they moved to New York, where they had their first daughter.  They lived on a small chicken farm; however, he noticed that his wife was sad and unhappy. He could see it in her face, he could see the tears building up in her eyes and wanting to explode. He thought she was unhappy because she was doing a lot of chores- taking care of the house and the baby while he was at work. He was proud to be able to provide the minimum shelter and food (milk, bread, eggs, and cheese) for his family but did not want to see his wife miserable. One day he took his daughter to the park so that his wife can sleep and rest. Sitting at the park, not one person said hi to him or even acknowledged him when sitting right beside him. It was at that point that he realized his wife was not unhappy because she was always busy, rather she was unhappy because she felt lonely and like an outsider. She did not feel welcome and that brought her to tears. After realizing that, my patient talked with one of his friends who owned a big beautiful farm and asked how he was able to afford this gorgeous farm. The friend told him that he received many loans…..and this is where my patient ended his story for the day. His blood transfusion finished and he had to go home.

I was so grateful that my patient was comfortable opening up and sharing his life story with me. Who knew a simple question could lead to such an inspirational conversation! Although I did not get to hear the rest of the story, I could tell my patient was a proud man. He was passionate about telling his story and fought through so much for the survival of his life and those around him. My patient is such an amazing man, looks great for his age, and despite everything he went through, he is a happy man and grateful for his life. I hope to continue to be a calming and caring presence for my patients as they receive their treatments. The experiences and conversations I have with my patients are ones that I will always remember and cherish. I cannot express enough how incredible my experience at the Cancer Center has been thus far, and I know that I will have much more to learn for the remainder of my stay. I look forward to what the rest of the year holds!”

She serves in Oncology Support and Community Outreach at the Bott Cancer Center.

Join us for our annual Pancake Breakfast! 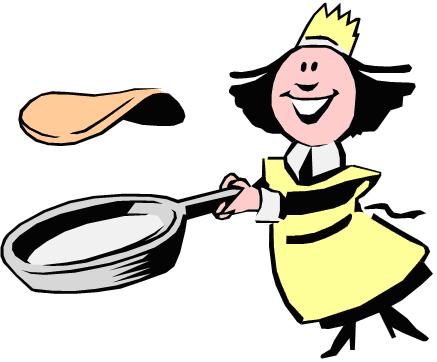 On Sunday, March 3rd from 8:00 am to 1:00 pm at the Provincialate of the Sisters of the Holy Redeemer (521 Moredon Road, Huntingdon Valley, PA), volunteers and staff will be serving up a delicious breakfast consisting of pancakes (plain and blueberry), scrambled eggs, sausage, bacon, coffee, tea and juice.

We will also have craft tables, raffle baskets, baked goods and more!

Tickets are $7 for adults and $4 for kids under 12 and will be sold at the door.

Proceeds benefit the Redeemer Ministry Corps program, celebrating 30 years of service!  We will have Sunday Liturgy at the Provincialate at 11:00, and RMC will be the special intention for the Mass.

If you are interested in donating a raffle basket, reserving a craft table or volunteering, please contact Jackie Young at 215-914-4116 or director@hrmcorps.org.  Hope to see you there!